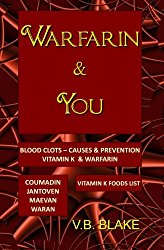 Warfarin, also known as Coumadin, is the most widely prescribed anticoagulant drug in North America but despite its effectiveness treatment with Warfarin has several shortcomings. Many commonly used medications interact with Warfarin, as do some foods, which may enhance or reduce its anticoagulation effect. This book explains how Warfarin works, giving readers an understanding in how food and medications alter its effects, and also provides information on how to enjoy a normal, healthy diet while using the drug, manage unusual situations, travel with Warfarin and much more. Includes Vitamin K food list.