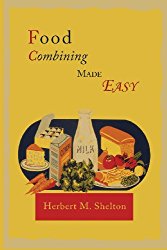 2013 Reprint of 1951 Edition. Full facsimile of the original edition, not reproduced with Optical Recognition Software. Written by Herbert Shelton, the founder of the natural hygiene movement, this classic has been the leading primer for anyone wanting guidance on which foods should and should not be eaten at the same meal for over sixty years. Readers will learn why combinations of acids, fats, starches, sugars, and proteins disrupt the normal processes of digestion. Shelton was known as the father of food combining and was among the first to advocate fasting and raw foods as healing therapies. Shelton was nominated by the American Vegetarian Party to run as its candidate for President of the United States in 1956. He saw himself as the champion of original Natural hygiene ideas from the 1830s.