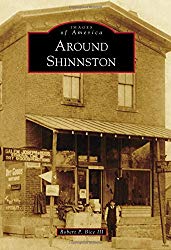 Surrounding the West Fork River and its tributaries, the communities in northern Harrison County are rich in both history and pride. With an abundance of natural resources, such as coal and oil, the areas featured in Around Shinnston developed into industries that brought growth and commerce. Many of these towns were named for the coal companies that established mines there, including Gypsy and Owings. Viropa was named for Virginia, Ohio, and Pennsylvania, while Wyatt, previously called Goosetown, was renamed to honor a local physician. Big Elm once carried the roots of the largest water elm tree on record, and Enterprise was a large Indian territory. Shinnston is the largest community in Clay District (third largest in Harrison County) and is home to the oldest structure in this part of the state. These areas were the "heart of the Bituminous Coal Fields" and today take pride in their history.