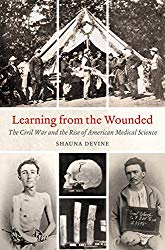 Nearly two-thirds of the Civil War's approximately 750,000 fatalities were caused by disease--a staggering fact for which the American medical profession was profoundly unprepared. In the years before the war, training for physicians in the United States was mostly unregulated, and medical schools' access to cadavers for teaching purposes was highly restricted. Shauna Devine argues that in spite of these limitations, Union army physicians rose to the challenges of the war, undertaking methods of study and experimentation that would have a lasting influence on the scientific practice of medicine. Though the war's human toll was tragic, conducting postmortems on the dead and caring for the wounded gave physicians ample opportunity to study and develop new methods of treatment and analysis, from dissection and microscopy to new research into infectious disease processes. Examining the work of doctors who served in the Union Medical Department, Devine sheds new light on how their innovations in the midst of crisis transformed northern medical education and gave rise to the healing power of modern health science.