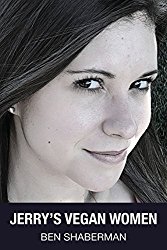 Jerry's Vegan Women is a fun, poignant, and occasionally steamy collection of fictional stories that follows the adventures of Jerry Zuckerman as he makes his way through the shelters, sanctuaries, and bedrooms of an eclectic assortment of vegan women. The book begins with Jerry as a sixth grader who has never given any thought about the welfare of animals or the food he eats. But his chance encounters with vegan women - friends, lovers, acquaintances, and colleagues - change all that. The book is by no means a vegan manifesto. Rather, it reveals the virtues, imperfections, and idiosyncrasies of those who choose the meat-free lifestyle. And, it explores universal themes such as love, work, and most of all, the search for identity and meaning. It's a journey that both herbivores and omnivores will enjoy.