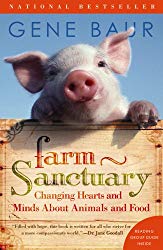 Leading animal rights activist Gene Baur examines the real cost of the meat on our plates -- for both humans and animals alike -- in this provocative and thorough examination of the modern farm industry. Many people picture cows, sheep, pigs, and chickens as friendly creatures who live happily within the confines of a peaceful family farm, arriving as food for humans only at the end of their sun-drenched lives. That's what Gene Baur had been told -- but when he first visited a stockyard he realized that this rosy depiction couldn't be more inaccurate. Amid the stench, noise, and filth, his attention was drawn in particular to one sheep who had been cast aside for dead. But as Baur walked by, the sheep raised her head and looked right at him. She was still alive, and the one thing Baur knew for sure that day was that he had to get her to safety. Hilda, as she was later named, was nursed back to health and soon became the first resident of Farm Sanctuary -- an organization dedicated to the rescue, care, and protection of farm animals. The truth is that farm production does not depend on the family farmer with a small herd of animals but instead resembles a large, assembly-line factory. Animals raised for human consumption are confined for the entirety of their lives and often live without companionship, fresh air, or even adequate food and water.Viewed as production units rather than living beings with feelings, ten billion farm animals are exploited specifically for food in the United States every year. In Farm Sanctuary, Baur provides a thoughtprovoking investigation of the ethical questions involved in the production of beef, poultry, pork, milk,and eggs -- and what each of us can do to stop the mistreatment of farm animals and promote compassion. He details the triumphs and the disappointments of more than twenty years on the front lines of the animal protection movement. And he introduces sanctuary. us to some of the special creatures who live at Farm Sanctuary -- from Maya the cow to Marmalade the chicken -- all of whom escaped horrible circumstances to live happier, more peaceful lives. Farm Sanctuary shows how all of us have an opportunity and a responsibility to consume a kinder plate, making a better life for ourselves and animals as well. You will certainly never think of a hamburger or chicken breast the same way after reading this book.