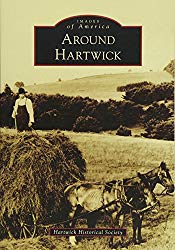 Around Hartwick depicts the history of the rural Hartwick Township at the geographical heart of Otsego County, nestled along the Otego Valley between western hills and the Susquehanna River. Named for John Christopher Hartwick, an itinerant German preacher with the dream of a "New Jerusalem" church and school, the township became the site of the first Lutheran Theological Association in America. Abundant water sources powered large woolen, cotton, and paper mills in Clintonville, Toddsville, and South Hartwick. Fertile land produced farm crops, including a contribution to the highest yield of hops in the world. With extension of the electric trolley north through the Otego Valley to the Mohawk Valley, the Hartwick hamlet prospered as the site of railway headquarters, central carbarns, and the sole power source for this vital transportation link. With the advent of the mechanical age and changing economics, mills relocated, the railway ceased, and farm production declined. Today, the township enjoys renewed prosperity with the influence of history museums and baseball from nearby Cooperstown.