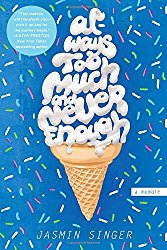 One woman’s journey to find herself through juicing, veganism, and love, as she went from fat to thin and from feeding her emotions to feeding her soul.   From the extra pounds and unrelenting bullies that left her eating lunch alone in a bathroom stall at school to the low self-esteem that left her both physically and emotionally vulnerable to abuse, Jasmin Singer’s struggle with weight defined her life.   Most people think there’s no such thing as a fat vegan. Most people don’t realize that deep-fried tofu tastes amazing and that Oreos are, in fact, vegan. So, even after Jasmin embraced a vegan lifestyle, having discovered her passion in advocating for the rights of animals, she defied any “skinny vegan” stereotypes by getting even heavier.   More importantly, she realized that her compassion for animals didn’t extend to her own body, and that her low self-esteem was affecting her health. She needed a change. By committing to monthly juice fasts and a diet of whole, unprocessed foods, Jasmin lost almost a hundred pounds, gained an understanding of her destructive relationship with food, and finally realized what it means to be truly full.   Told with humble humor and heartbreaking honesty, this is Jasmin’s story of how she went from finding solace in a box of cheese crackers to finding peace within herself.